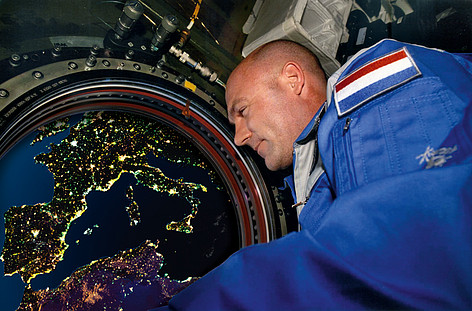 André Kuipers is a Dutch Physician and ESA astronaut. He graduated from the university of Amsterdam and has been involved in the preparation, coordination and execution of physiological experiments for the European Space Agency (ESA). Kuipers has flown two space missions: The DELTA mission in 2004 and the promISSe in 2011/12 where he performed a broad range of experiments testing the influence of microgravity on hemodynamics. Chris Imray practices as a vascular surgeon in the United Kingdom. He summitted Everest as a member of the Caudwell Xtreme Everest climbing team, the group that gave insight in physiology of extreme altitude by performing direct field measurements of arterial blood gases on Mount Everest.

He is a specialist in treating frostbite injuries, for which he has been consulted from over the world by several expedition teams and medical specialists by transmitting and discussing digital photos and digital bone scan images. Professor in Surgery – Emergency Medicine, WMS founder and former president, more info
Paul Auerbach practices at the Stanford School of Medicine, California. As a leading voice in the area of Wilderness Medicine he founded the Wilderness Medical Society, was editor of Wilderness and Environmental Medicine as well as serving on several other editorial boards. Although most famous for his textbook ‘Wilderness Medicine‘, he specialised in Marine Medicine publishing several titles on hazardous marine animals and scuba diving. Currently he focusses on bringing the lessons of wilderness medicine to humanitarin work.

Expedition Doctor with expertise in polar and high altitude medicine

Martin Rhodes has accompanied expeditions to the Himalayas, South America, the Arctic and Antarctica. Doc Martin worked as the Chief Medical Officer for the documentary ‘Poles Apart’ and two extreme-environment logistics companies (Adventure Network) and runs a gîte in the French Pyrenees.

Pieter Wismans is head of training of the Internal Medicine Division of the Harbour Hospital and a specialist in tropical import diseases. The port of Rotterdam is the largest port in Europe, and was the busiest port in the world until 2002. The port has always been a major hub to the outside world, not only cultural, but also from a public health point of view. Historically the Harbour Hospital has catered to sailors and now travellers in general, with for instance the only Ebola unit in the Netherlands.

Jacqueline Lampe is the director of Dutch divison of the oldest NGO operating on the African continent. It focuses on structural improvement of the health of impovereshed Africans. 97% percent of all employees haven an African nationality. In case of complicated illness AMREF uses medical flights in remote areas to deliver specialised medical personnel to perform surgery. Of course they train local medics before leaving so care can continue, even after the flying doctors have left!

A significant part of your admission will be donated to AMREF Flying Doctors!!

Richard Mastenbroek is specialised in snake handling and experienced in the acute treatment, even when he gets bitten himself. His favourite species are the Elapidae family (Cobra). He is attached to the Rotterdam harbour Hospital, a knowledge centre on the treatment of snake bites. He will discuss an overview of the treatment of snakebites and new advances in snake vaccine development.