This year the 102nd Four Days Marches take place from 17 to 20 July in Nijmegen, The Netherlands.1 With 48.000 people participating, this is the largest multiple-day walking event in the world and participants walk 30, 40 or 50 kilometers each day, depending on age and gender. The start is at 4:00 AM and everyone needs to finish before 5:00 PM to be allowed to start the next day. In recent years about 10% of the walkers do not finish the Four Days Marches. Most of them drop out on the second day. 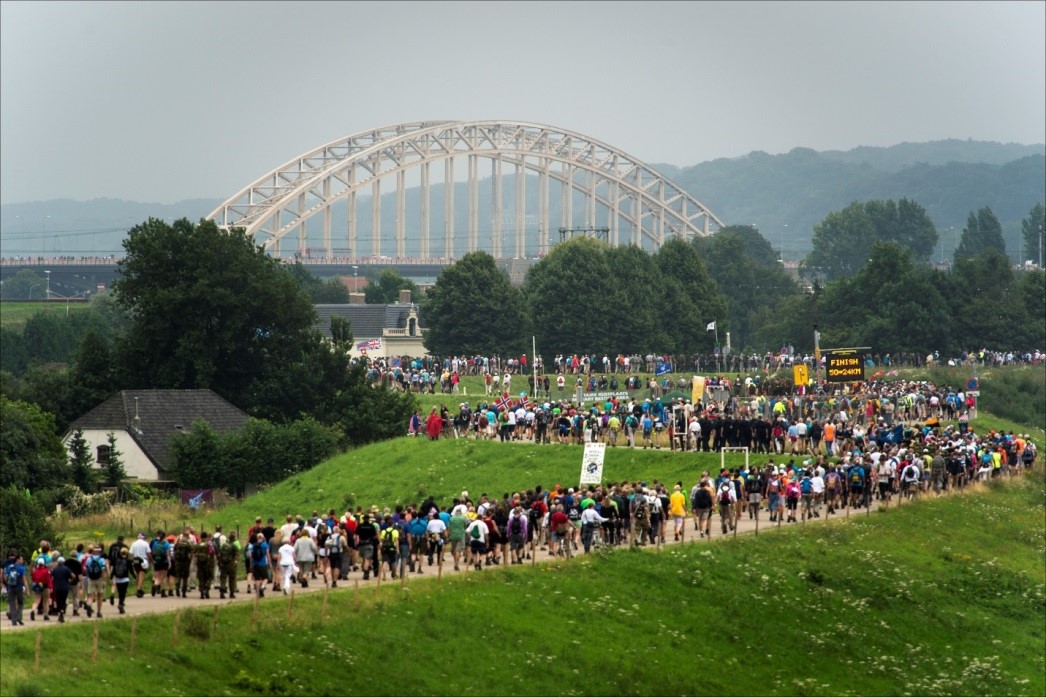 The Nijmegen Four Days Marches always start on the third Tuesday of July, which is the hottest month in the Netherland and therefore the temperature is generally quite high. Apart from some thermal discomfort, the heat does generally not lead to serious problems. An exception to this was the edition of 2006 in which the ambient temperature rose to 34°C in the shade. On the first day of walking, five participants had to be resuscitated on the route and two of them deceased. Apart from that, 300 people fainted as a result of the heat exposure. The organization decided to cancel the remaining of the event since the heat posed too much physiological stress upon the participants.2 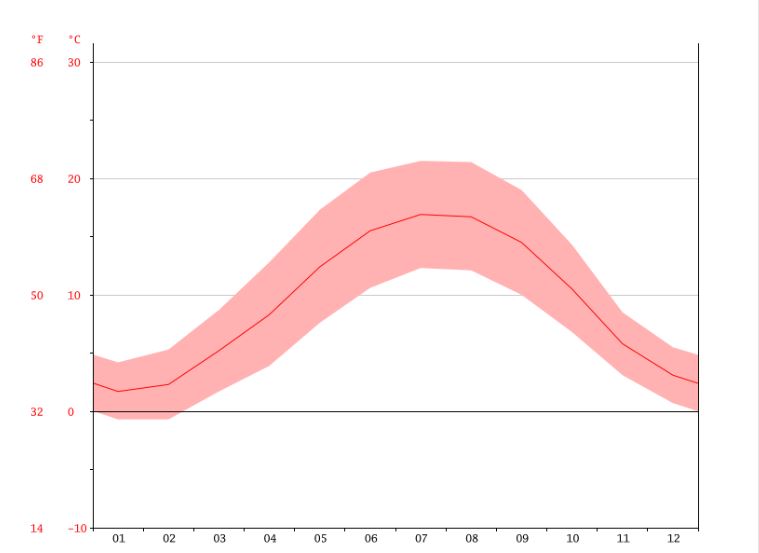 Average temperature during the year in Nijmegen3

The cancellation of the Four Days Marching in 2006 shows that there are risks associated with performing physical activity in a hot and humid environment, especially in windless conditions. The three ‘classical’ exercise-associated heat illnesses are 1) heat cramps, 2) heat exhaustion, and 3) heat stroke.

Heat cramps are involuntary muscle contractions and occur during or after exercise. However, because body core temperature does not necessarily need to be increased for heat cramps to occur, the direct link between exercise-induced hyperthermia and muscle cramps appears to be lacking.4 The treatment of heat cramps exists of stretching the cramped muscles. On the long-term, replenishing of the fluid and mineral reservoirs of the body is necessary.

Heat exhaustion is the most observed heat-related illness and is characterized by the collapsing of an athlete during or after exercise. It often occurs when individuals perform the exercise in a hot environment while being un-acclimatized. The cause for heat exhaustion is believed to be an increased body core temperature caused by extracellular fluid or electrolyte deficits as a result of excessive sweating and inadequate rehydration. When exercise is stopped, blood tends to pool in the dilated peripheral vessels and the resulting reduced central blood volume leads to a weak pulse and low blood pressure, and this might ultimately result in collapse. Other signs and symptoms of heat exhaustion are non-specific and are summarized in the table below. Heat exhaustion is sometimes referred to as a mild form of the dangerous condition heat stroke, but as core body temperatures are usually < 40°C, the direct link with an elevated core temperature is still unclear. The treatment of heat exhaustion is simple and straightforward: removing the person from the heat source and providing rehydration.

Heat stroke is the most dangerous of the three ‘classic’ heat-related illnesses and is without a doubt related to an elevated core temperature. The diagnosis is based on three factors: a core temperature exceeding 40°C, malfunctioning of the central nervous system (CNS), and a preceding period of heat exposure.5 The symptoms of heat stroke are stated in the table below. Similar to heat exhaustion, a reduction in central blood volume can result in a pronounced rise in core temperature. Moreover, a reduced visceral blood flow can lead to cellular hypoxia in the intestine and liver, which may eventually lead to leakage of endotoxins into the bloodstream. When these endotoxins activate leukocytes and endothelial cells, and these cells excrete inflammatory cytokines, the hypothalamic setpoint for sweating and peripheral vasodilation can be increased, impairing heat loss even more. The most important goal of the treatment of heat stroke is a quick reduction of core body temperature, as the main predictor of outcome is the duration of. Submersion in (ice)cold water appears to be the fastest way to reduce core temperature and should, therefore, be the treatment of choice for heat stroke. 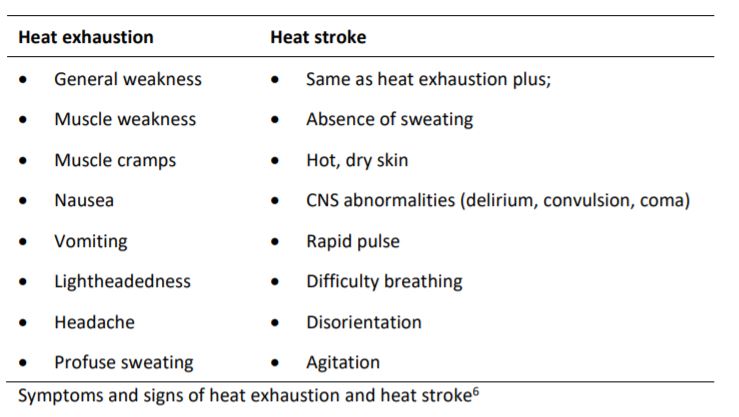 After the cancellation of the Four Days Marches in 2006, the organization decided to start a research project on the thermophysiological load on the participants.7  Within this project, the heart rate, core temperature and drinking behavior of 66 participants were monitored during the four walking days. Albeit the core body temperature rose to 38.2°C this is still well below dangerous hyperthermia limits and the thermal burden could therefore not be classified as dangerous.

The rise of the core body temperature on the four days of the Four Days Marches in Nijmegen in 2007.7

Interestingly, a great variability in drinking behavior was found among the participating individuals. The mean fluid consumption was 3 L per day but the range was very large. The minimal consumption was 0.3 L and the maximum was no less than 12 L per day! The medical risks of both hyper and hyponatremia as a result of too little or too much drinking should not be underestimated. The most important advice to the participants of the Four Days Marching is to weigh themselves before and after walking and to adjust drinking behavior accordingly. 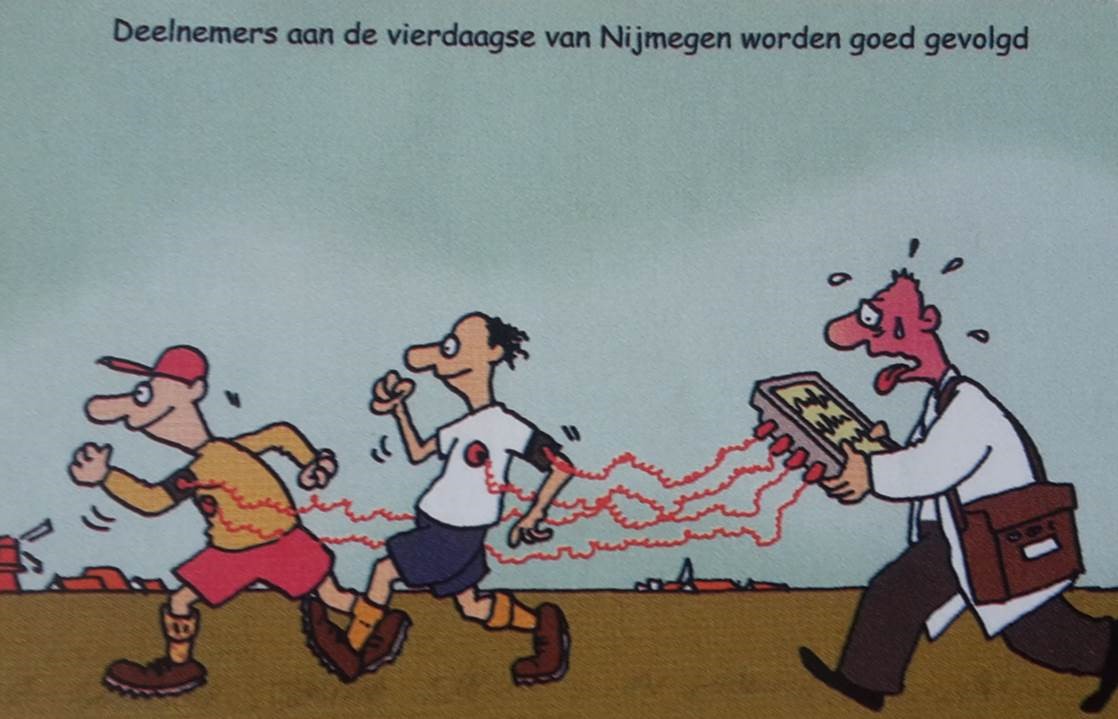 Apart from drinking sufficiently (but not too much!) during the walking, there is another important advice to the walkers: start the Four Days Marches well-acclimatized. Extensive scientific research has shown that performing a regular exercise in the heat leads to significant physiological adaptations that improve thermoregulation. After only a few days of heat exposure plasma volume increases, the core body temperature rises less quickly, the sweat threshold is lowered and the heart rate during exercise is reduced.8

In summary, participating in the Four Days Marches does not pose great risks for healthy individuals, even not when the temperature is high. However, starting well-prepared can reduce the risk even more. Apart from a good preparation, it is important to listen to bodily signals and reduce the intensity when it’s hot. When things do go wrong and heat stroke occurs, quickly reducing the core body temperature is essential for recovery.